Leaving Tottori prefecture at noon, we arrived at Izumo City in Shimane prefecture in an hour or so.  The train we took was full of local people, not rushing at all, really tranquil.

Izumo was the center of Japan a long time ago. Japanese at that time had active trading with people on the continent, and all new technologies and knowledge were first arriving at this region from China and Korea. Izumo was prosperous and its people went as far as to constitute an independent polity.  But, unfortunately, during the 4th century they were absorbed into the state of Yamato Province, which was gaining power and extending their influence from present-day Nara prefecture. Vanquishing the ruling families across western Japan, Yamato established the Yamato dynasty (Wakoku), which was ruled by the Great King of Yamato, the origin of our imperial family.

Izumo lost its power, but it has always been playing a sacred role in Japan, and even today it’s the same. The spiritual impact Izumo had at that time was really remarkable. To prove it, you will see that Japanese mythology contains a lot of mentions of Izumo. Most of the Japanese myths say that the creation of the land of Japan took place at Izumo . Various gods at Izumo created our land, and that means we can say Izumo City is the place where Japan was born!

To get to Izumo Taisha (Izumo Shrine) from JR Izumo Station, we took the Ichibata Densha, a small local train. In the train we had a young female conductor managing everything. She was taking care of passengers’ tickets, directing us to the right way when we changed trains, and giving us a short guide about the sightseeing spots. I didn’t know Shimane had some wine makers until she explained it! I was very impressed that she did so many things during the short ride.

Enjoy the petit excursion and a beautiful landscape of Japanese countryside. 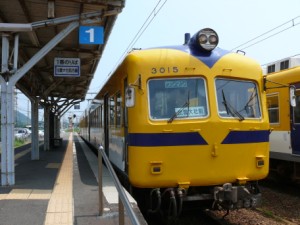 Izumo-Taisha-mae-eki is the terminal of the Ichibata Denasha Line.  According to Ichibata Densha Company, this station was built a hundred years ago (the year 2012 is its 100th anniversary)!  It has always been here, rain or shine!!!  It’s a simple design, but considering the time, it is very modern. 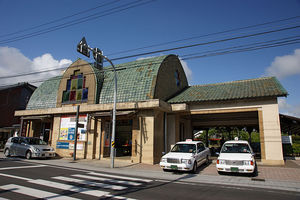 (This photo comes from Wikipedia) 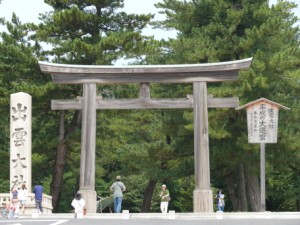 Starting from Izumo-Taisha-mae Station, we walked a few minutes and came to a big torii,  the entrance of Izumo Taisha.  A torii is the gateway to a Shinto shrine, and it is regarded as a barrier against evil spirits.

Japan is the country of “kami,” Shinto gods, and Izumo Taisha is one of the most important Shinto shrines,  dedicated to the god Okuninushi.

Do you remember the story about the hare at Hakuto Beach ( Tottori Day 1)? Okuninushi, or Onamuchi as he was young, had many older brothers called Yaso-gami, and all of them wanted to marry the princess Yakami. However, when Okuninush saved a poor hare on the beach Hakuto, which was actually a god, the hare told that it would be Okuninushi who would marry the princess.

Learning about this, his brothers became furious and started to attack Okuninushi. Then his mother, Kami-Musubi, advised him to take refuge in the underworld.

In the under world, he met the storm god, Susano, and his daughter, Suseri-hime, with whom Okuninushi soon fell in love with. Knowing that, Susano got enraged, and in response he gave Okuninushi a number of ordeals. Okuninushi successfully managed to overcome all the trials and left the underworld with the princess. After coming back to his world, Okuninushi, then, fought his older brothers with the weapons he got in the underworld. When the entire ordeal was over, he became the ruler of Izumo and started to create the base of the land of Japan. 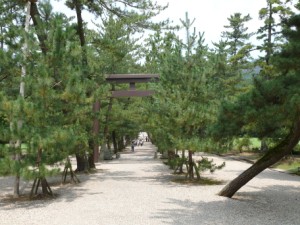 I don’t remember how much we walked , but I do remember it was very very hot! We continued on the path to the shrine, looking for a shade … but in vain… I found on the way, however, the statues of the hare and Okuninushi, and their presence encouraged me to walk on… 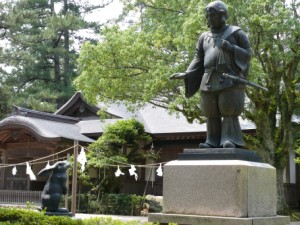 Here we are! This is where the god, Okuninushi, lives. A big ornament hanging from the eaves is called “Shimenawa” (the photo above). A shimenawa is a straw rope with strips of folded paper. It is considered to repel evil spirits.

Some people were throwing a coin at this shimenawa. They believe that if the coin they throw successfully gets stuck in the straw rope they will have happy marriage. However, other people think that such people are not respectful to the god…

Another interesting thing I learned is that the shimenawa at Izumo Taisha is woven in the opposite way from the way used for other ordinary shimenawa ropes. This means that the sacred rope at Izumo Taisha is designed to prevent evil spirit from escaping from the inside of the shrine. It sounds strange, doesn’t it? A lot of mysteries are still there to be solved. 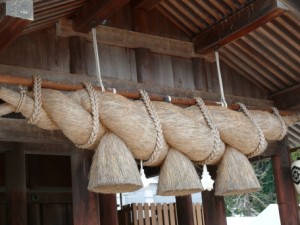 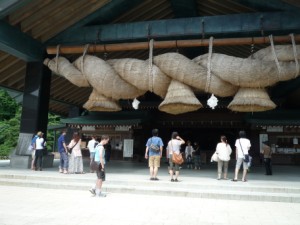 How do we pray at Izumo Taisha?

*Remember you mustn’t clap your hands at a temple. At a temple you join your hands quietly in prayer. Here are some tips for manners !

Kashiwade (clapping the hands) in Shintoism is believed to have originated from the sound of the creation of heaven and earth. In other words,  it is the sound when Japan was born. In our myth, Amaterasu-omikami, the goddess of the sun, had sequestered herself in the cave because the storm god Susano was behaving violently. The world was in the darkness and chaotic while she (or the sun)  was in the cave. And finally, when she appeared, or the sun came out, Japan was put in perfect order. The sound also indicates the light to this world.

Gassho (putting the hands together) in Buddhism, on the other hand, comes from the general way of greeting in India and Southeast Asia. It is an expression of respect to the other person. This form was adopted and is still used to the present day as a way to show one’s belief in the Buddha.

When you visit a shrine, remember to follow these rules.

1. You bow when you pass the torii gate. If you want to walk on the left side of the path, you start to walk with your left leg, and the right side with your right leg. Avoid walking in the middle of the path where the god walks.

2. Before you pray you should purify your hands and mouth with sacred water. Don’t let your lips touch the dipper.

3. When you pray in front of the altar, avoid standing in the middle. You should show your modesty to the god.

4. When you make a money offering, don’t throw it, but do it gently.

5. You don’t make a wish but you show your gratitude for the god first.

Amaterasu-omikami is a major deity of the Shinto religion. She is the goddess of the sun and of the universe. She sent some messengers to Izumo to tell Okuninushi that the world where Okuninushi was should be governed by the descendants of Amaterasu-omikami. Okuninushi accepted this order on the condition that he would have a palace of his own. And the palace is now called Izumo Taisha.

Some people believe that this exchange didn’t go smoothly. Okuninushi might have been in great despair and anger because he had to give up his land. That’s why this shrine has a unique pattern of shimenawa in order to keep the vengeful spirit of Okuninushi shut in.

I don’t know what is true, but it is an interesting hypothesis.

The Emperor of Japan is said to be a direct descendant of Amaterasu, and it means this story actually shows that the Yamato dynasty was expanding its power and finally reached the Izumo Region. 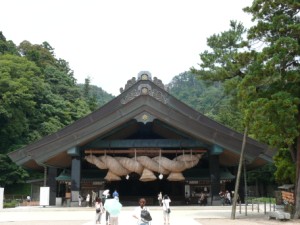 The origin of my country is very mysterious. But our imperial family carries the roots. Look at the tree in the photo. This tree , found in the compound of the Izumo shrine, was planted when our future emperor Hisahito was born in 2006. 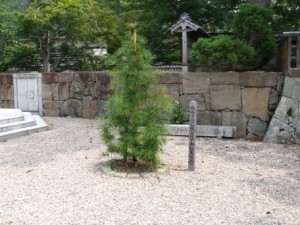 There are many souvenir shops and soba restaurants around the shrine, and we decided to taste Izumo soba (the photo above) for lunch. 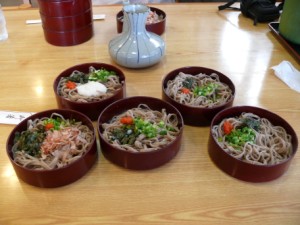 After delicious lunch, we continued our excursion.

Izumo is also known for the origin of Kabuki. It’s a traditional stage drama performed by men, to the accompaniment of songs and music. They dance with elaborate (or eccentric) costumes on.

Okuni, the originator of kabuki theater, is believed to have been a shrine maiden at Izumo Taisha. She traveled to Kyoto and performed a new style of dancing, singing, and acting to ask for money to repair and renovate the shrine. At that time it was difficult to find money to maintain shrines or temples, and she came up with this unique idea. 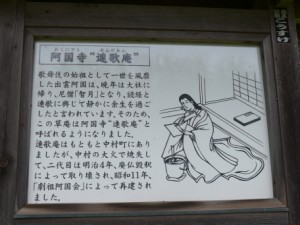 This small cottage is the place where she spent her later years. 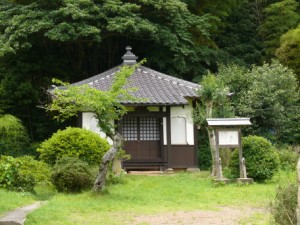 Initially Kabuki was performed by female performers, but the Edo government prohibited them. Many people followed the way Okuni did, but for different purposes, including prostitution business, and it was considered as corrupting public morals. And since then, Kabuki has been always played only by men.

My husband found her wearing a necklace with a cross (on the statue near the cottage), but I don’t think she was a Christian. She was trying to look eccentric to draw more attention when she performed. 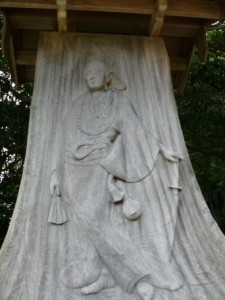 You can also visit her cemetery. I think it was a 10 minutes’ walk or so from the shrine. And if  you continue farther on the same street toward Inasa Beach, you will find a small mountain, which is also dedicated to Okuni. There is a memorial tower. If you go there, go up to the top of the mountain. The mountain is called “Hono-zan”. You can enjoy a panoramic view of Inasa Beach. 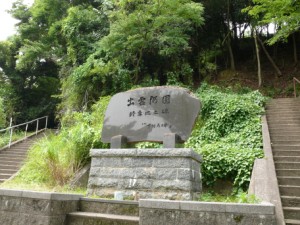 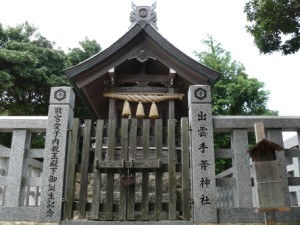 Another myth tells us that Izumo used to be a very narrow incomplete country and that Izumo people had to pull in some extra land from other countries to expand their territory. Look at the island  in the photo above! It could have been pulled in too! 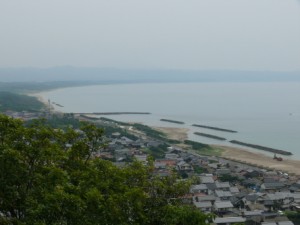 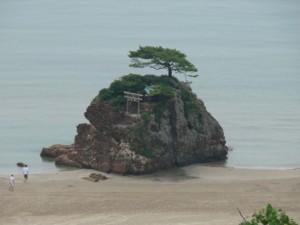 In the traditional Japanese calendar, the month of October is called Kan-na-zuki. While today we all call the month just “ju-gatsu”, literally meaning the tenth month, Kan-na-zuki indicates that it’s the month with no gods. Kan=gods, na=no, and zuki =month. Why no gods? It’s because all the gods in Japan leave their shrines and have an annual gathering at Izumo Taisha! So, in Shimane prefecture people call the tenth month Kami-ari-zuki, which means the month when the gods are present.

In this region, there are many many more sites to visit. The capital city of Shimane, Matsue, is also a must-go. You shouldn’t miss their specialty, shijimi clams. And Iwami Ginzan (a silver mine) was added to the World Heritage list in 2007.

Have a lot of fun in Shimane! You can download an English guide at Izumo Tourism Guide.