Abe no Seimei (安倍晴明) is one of the most popular persons in Japanese history. There are many novels and comic books based on his life, and some movies also tell you how mysterious this historical personage was.

In Chinese philosophy, in and yô (陰陽 or yin and yang in Chinese pronunciation) represent negative and positive. It is the principle of duality. Everything has an opposite, and without the contrary force, the other element can’t exist. Life and death, male and female, sun and moon, fire and water … all things in the natural world are interconnected.

On the other hand, gogyô (五行) means five elements, Wood (木), Fire (火), Earth (土), Metal (金), and Water (水), which form all things in the universe. With these five elements interacting to each other and appearing and disappearing, things we see and we feel are also permanently changing and circulating.

These two philosophies were later integrated into one, and became Inyô gogyô philosophy.

When Inyô gogyô philosophy arrived in Japan, around the 6th century, it was accepted as a practical method in telling people’s fortunes, and then it developed little by little into Onmyô-do.

In the Heian period of Japan (794-1192), when Abe no Seimei was active, people believed that all bad things, like illness, natural disasters or social unrest, came from onryô (vengeful spirits). So Onmyô-do was under the control of the imperial government. It was a very important profession.

It was not until the middle of the 19th century that Onmyô-do was finally prohibited as superstition.

What did Abe no Seimei do?

Seimei was a master of Onmyô-do and thus in a high-ranking government position. He made calendars using his rich knowledge on cosmology, and used his spiritual power to solve various problems.

One day, the dog, which a court noble, Fujiwara no Michinaga, was taking care of with affection, tried to stop him from going out. Surprised at its unusual behavior,  Michinaga asked Seimei to investigate the situation. When Seimei practiced divination, he learned that the dog sensed Michizane was on the way to be cursed by someone’s shikigami.

＊Shikigami (式神) is a supernatural monster considered to be some sort of a god (神 kami), which was used by Onmyôji. It is usually invisible. It helps Onmyôji to see through good and evil hidden in people.

Seimei used his shikigami to find who was going to curse Michizane, and settled the problem. 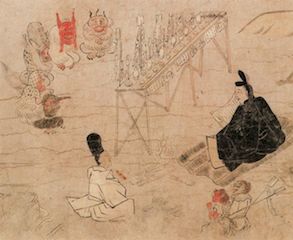 Kanawa no Ido means “the well of Iron Tripod”.

First I’ll introduce “Hashi-hime” story, which is considered as the original of “Kanawa no Ido” story.

Once upon a time, a woman named Hashi-hime, a daughter of a court noble, was living with her husband. But her husband cheated and married a second wife. Hashi-hime became furious and decided to practice “Ushi no koku mairi” at Kifune-jinja shrine (see the page of Kurama/Kibune). She stayed there for 7 days praying that she could become an oni monster so that she could kill the woman who stole her husband. Kifune Daimyôjin (a shito god) felt pity for her and told her to soak in the Uji-gawa river for 21 days if she really wished to become a demon. Then she did as she was told, and she became an org while she was still alive.

When she returned to Heiankyo (Kyoto), she made five horns by separating her hair into five parts, painted her face and body red, put a tetsuwa or kanawa (a tripod) upside down on her head, put torches on the three legs of the tripod, and put a torch bunting at both ends into her mouth. She scared people to death every night.

One day, a man named Minamoto no Tsuna found “a woman” walking alone when he was crossing Modori-bashi bridge (戻橋) at the Ichi-jo Horikawa River.  She looked around 20 years old, and her skin was as white as snow. Tsuna offered to escort her saying that it was dangerous to walk alone at night. He dismounted from his horse and gave her a  ride on it. But after a while, Tsuna came to witness her changing into an oni. The oni grabbed his hair and tried to fly away, but Tsuna kept calm and cut its arm off with his sword.

Seeing the arm cut by Tsuna, Seimei told Tsuna to confine himself to his house for seven days and said that he would take care of the arm. Seimei, then, succeeded in sealing the vengeful spirit.

In “Kanawa no Ido” story, however, it is said that Hashi-hime couldn’t make her wish come true, which means she couldn’t become an oni. She was doing “Ushi no Koku Mairi”, but just the day before her wish was supposed to be realized, she died around the well, or some say she threw herself into the well.  Her ex-husband suffered from a nightmare every night and thought it was a curse from his former wife. He visited Abe no Seimei and asked him for help. Seimei made two dolls, one represented the husband, and the other one his present wife. Then, a figure with a tripod upside down on her head appeared. Seimei kept saying his prayers and expelled the vengeful spirit. 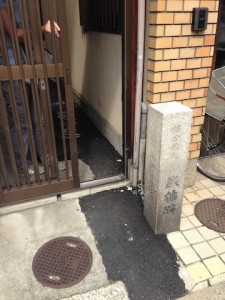 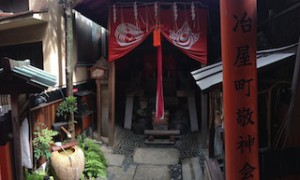 This well and the shrine stand quietly somewhere in a residential area of Kyoto…. It’s like this place is really hidden…. If you are interested, you can visit there. But be quiet. Don’t bother the residents living nearby.

Well, let’s get back to Abe no Seime again.

Seimei-jinja Shrine was founded by Emperor Ichijo after Seimei’s death. 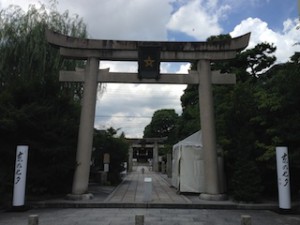 This is Ichi no Torii (Shinto gate). He used the crest of Gobosei (pentagram) as the symbol of Gogyô. 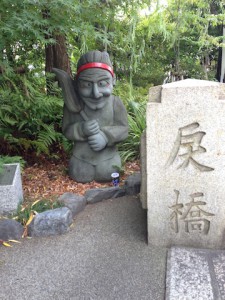 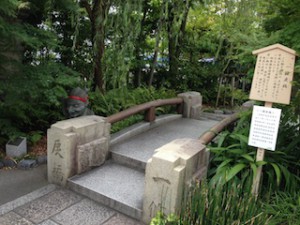 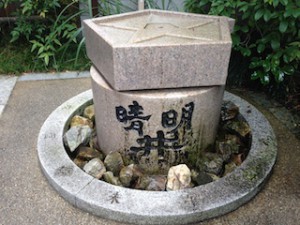 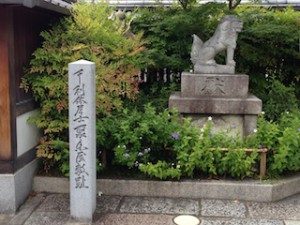 Seimei-i (晴明井) is a well of Seimei. The water from the well was drawn by a magical power. It is said that by drinking this water you can  shut out bad diseases. Sen no Rikyu, known as a tea master, also brewed tea with the water from this well. His house stood near this well too (the photo on the right). 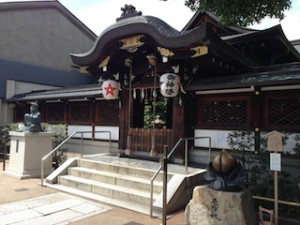 Do you see a big peach objet on the right side in the photo? In Onmyô-do the peach is the fruit that helps us to ward off evil spirits. You stroke it softly, and you will have its divine favor. 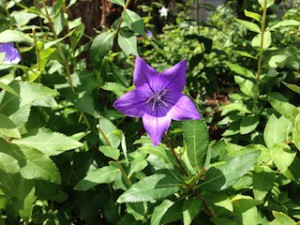 I also found a lot of Japanese bellflowers. These five-petal flowers are thought to represent the pentagram.

At this shrine, you can find various luck charms, and if  you are a foreign visitor they will offer you a magical sticker of this shrine. You just show them your passport. I also bought a special amulet sold only during the flowering season of Japanese bellflowers.