Nijo-jo (二条城) is the castle constructed by the Tokugawa clan during the Edo period. It is registered as a UNESCO World Heritage Site as part of the ‘Historic Monuments of Ancient Kyoto.’

After the victory of the Battle of Sekigahara in 1601, Tokugawa Ieyasu planned to build a residence castle in Kyoto, and started to remove townhouses. The  daimyo (Japanese feudal lords) of the western provinces, who were on the side of the Toyotomi clan in the Battle of Sekigahara, had to pay the cost of construction and give their services as laborers .

In 1611, the meeting between Ieyasu and Toyotomi Hideyori was held at Nijo-jo. Hideyori is the successor to Toyotomi Hideyoshi, the former ruler of the nation. Ieyasu was surprised to see that Hideyori had grown as a charismatic man, and he felt a sense of danger that the Tokugawa clan might be overthrown by the Toyotomi clan. It is also said that it was at this time when he decided to bring down completely the Toyotomi family.

Nijo-jo was used by successive Tokugawa Shoguns, but after Tokugawa Hidetada died, in 1634, this castle vanished from the center stage of history, for almost 230 years.

The 14th Shogun, Tokugawa Iemochi , visited Kyoto in 1863, and the castle was renovated for his stay. In those days Japan was in great political disorder because there was a lot of pressure from foreign countries. He was requested by the Imperial Court to exclude foreigners, and also had to make the Choshu Conquest to subjugate the Emperor’s enemy Choshu Domain (present-day Yamaguchi prefecture).  He moved to Osaka Castle to take command of the conquest, but he fell sick and died there.

In 1866, Tokugawa Yoshinobu accepted the appointment of the 15th Shogun at Nijo-jo after being persuaded by the Shogun cabinet and the Imperial court.

But the conditions were getting more and more unfavorable to the Tokugawa government, and in 1867 Yoshinobu transferred ruling power back to the Emperor at Nijo-jo. 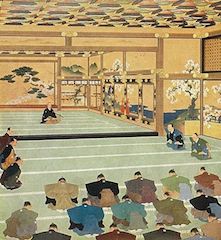 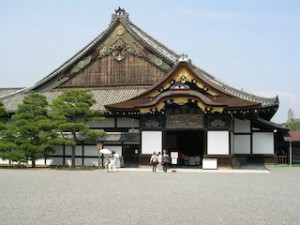 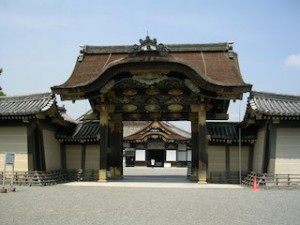 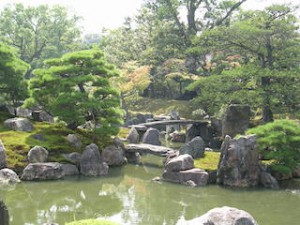 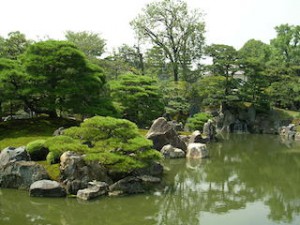 You stop at Enmachi Station (円町駅), one after Nijo Station (二条駅), on the JR Line, and you will find an interesting temple called Daruma-dera. This temple belongs to the Myoshinji school of the Rinzai Sect. Its official name is Hôrin-ji (法輪寺), but it is better known as “Daruma-dera”.

Daruma is the Indian monk who introduced Zen to China.

Legend has it that Daruma lost his legs and arms because he practiced Zen meditation sitting cross-legged while facing a wall for nine years. And this legend produced “a daruma doll.” It is very popular among Japanese people as a lucky charm. The doll has no arms and no legs, but it never falls even if you push it.

We say, “nanakorobi-yaoki (七転び八起き)”. If you fall seven times, you get up eight times. It means your life always has ups and downs, but you should keep still and be patient even after repeated failures. Fortune comes around.

About 8,000 daruma dolls and statues are housed in the Daruma-do (Daruma hall). 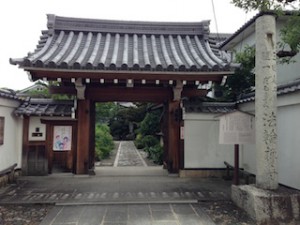 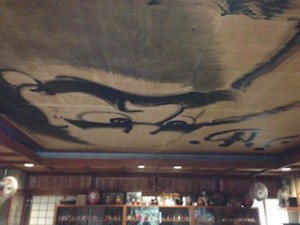 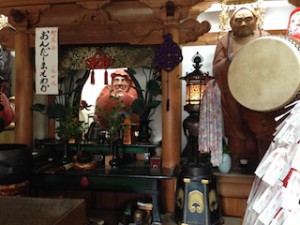 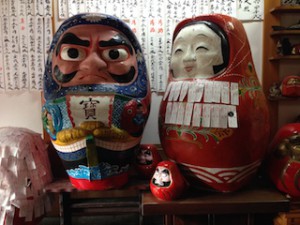 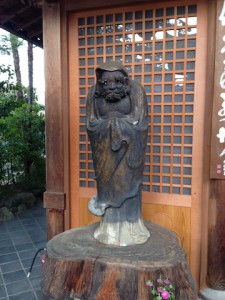 If only we had so much patience like him…