Finally the day came for my husband to visit Hiroshima. He had long wanted to see the famous Shinto gate at Miyajima.

And he was also excited to take the Shinkansen !!! 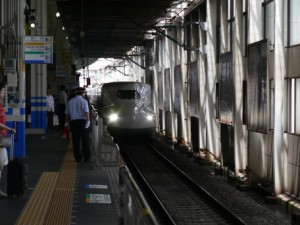 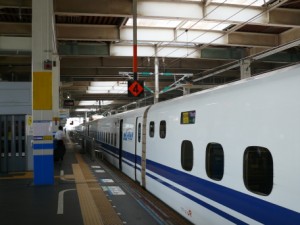 France has TGV, but we prefer the Shinkansen because it’s really comfortable, clean and punctual!!!

And we love Japanese eki-ben! (box lunch sold in a train or at a station).

We never get tired of what we eat while in Japan. France does have great cuisine, but when it comes to something simple to eat, it’s always a sandwich…! 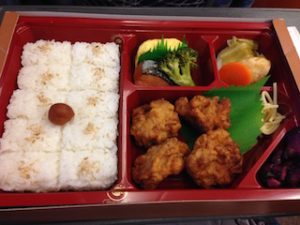 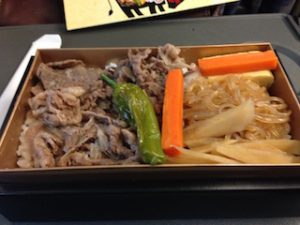 Japan has a variety of local dishes, like fugu cuisine in Shimonoseki, and my hometown is known for Tajma beef (origin de Kobe beef). Each region has each specialty.

The first thing most Japanese people associate with Hiroshima cuisine will be Hiroshima-yaki. It is like okonomi-yaki, but it’s different. 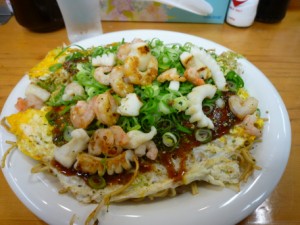 Okonomi-yaki is kind of a Japanese-style pancake usually grilled on an iron plate. It is made from batter with sliced beef or pork, egg and chopped cabbage. Osaka has a lot of restaurants of this kind, but in Hiroshima, the way they prepare is quite different. They don’t mix the ingredients but they rather pile them up. You see the photo above. They also use soba noodles. For both okonomi-yaki and Hiroshima-yaki, the sauce is delicious! It’s a must-try in Japan!

We didn’t have much time for lunch, so we had our lunch near Hiroshima Station. Of course we ate Hiroshima-yaki. But if you have time, visit Okonomi-mura (English).

After enjoying delicious Hiroshima food, we started to accomplish my husband’s big mission!

Miyajima is regarded as one of the three most famous scenic locations in Japan.  We say the autumn is the best season for the trip to the Miyajima island because we can enjoy a beautiful scenery with different colors of leaves.

Miya means a shrine, and jima is an island. So Miyajima literally means “Shrine Island.” Since ancient times this island has always been believed to be sacred. 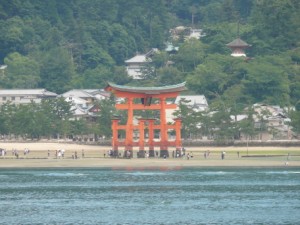 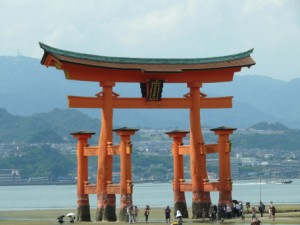 Itsukushima Shrine was registered as a UNESCO World Heritage Site in 1996. Several buildings and possessions at this shrine are also designated as National Treasures by the Japanese government. 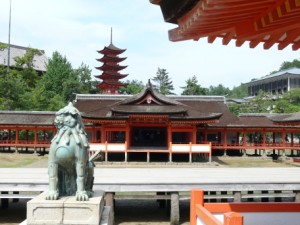 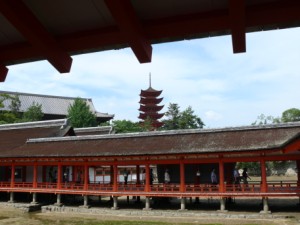 Originally, local people believed that this island itself was a god, but  their belief was growing bigger and bigger, and the shrine was also extended as they invited some other marin gods. Miyajima is situated at a very important place for sailing in the Setonai-kai ( the sea of Setonaikai), and therefore  it was natural for the seafarers to introduce new gods for a safe voyage.

One of the marin goddesses, enshrined here in 593, is called Ichikisima-himé-no-mikoto. Some people say that the name of Itsukushima comes from her name, but some other people suppose that “itsuku” means “serve” gods on the island.

The Heian period (794–1185) was the time when the Taira clan was gaining power (see the page for Shimonoski). Taira no Kiyomori (1118–1181) is known as the first warrior who established samurai-dominated administrative government.

He acquired the marine control of Setonai-kai (or the Seto Inland Sea), extending his power toward the west of Japan, and naturally he came to worship Miyajima. He built some shrine buildings, but unfortunately they were all burnt down because of fire. The remaining buildings that we see today were built after his death.

Itsukushima Jinja was a guardian deity for the Taira clan.

During the Sengoku period (or Warring States period/the mid 15th—the early 17th), Mori Motonari (1497–1571/See the page of Hagi), a daimyo in the west Chugoku Region, won a victory at Itsukushima-no-tatakai (the Battle of Itsukushima), which later allowed him to go on further west. He renovated the shrine buildings and worshiped Itsukushima Jinja.

Miyajima has seen a long history of Japan. 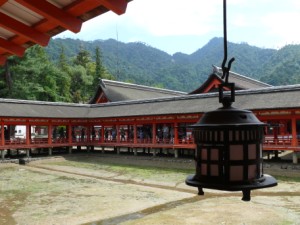 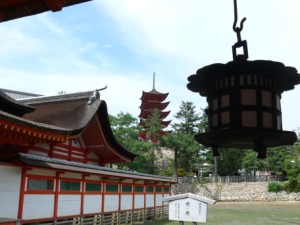 When we visited the island it was at low tide. Many people were walking around the shrine gate. My husband was expecting to see it standing in the water, but he was anyway happy to have access to the gate itself. It’s another experience!

There are deer everywhere on the island. They are so cute, but be careful, if you carry a plastic bag they will come very close to you! I was scared ! 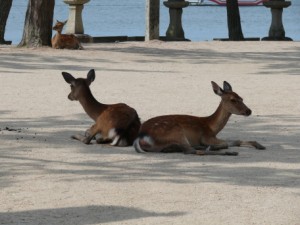 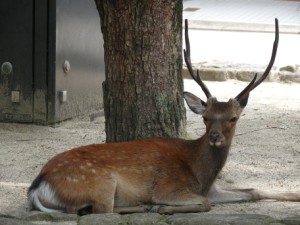 From the Ferry Terminal to the shrine grounds you can also enjoy shopping and have a break at a café or a restaurant. Oh, and don’t forget to taste “momiji manju”. It’s actually sold everywhere in Hiroshima, but Miyajima has its origin.

Manju are buns stuffed with sweetened bean paste. What’s special about momiji manju is that  it has a shape of a Japanese maple (Momiji means a maple in Japanese). Miyajima is famous for its beautiful landscape with scarlet maple leaves in autumn.

In the Meiji period, a waitress in a ryokan (a Japanese traditional hotel) asked a Japanese pastry chef to create sweets worthy of the fame of the ryokan, and momiji manju was born.

Miyajima is also a sister city of Mont Saint-Michel in France! This relation is very symbolic, because both the shrine and the monastery stand in the sea! Next time I have to visit Mont Saint-Michel! 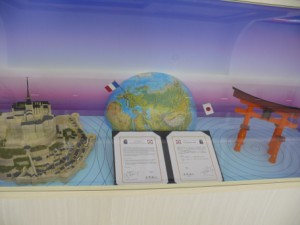 Back in Hiroshima City, we went to see another sightseeing spot, Atomic Bomb Dome.

This monument is listed a UNESCO World Heritage Site. 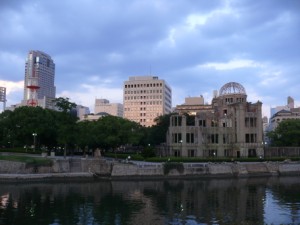 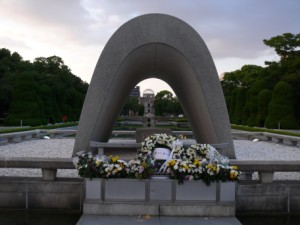 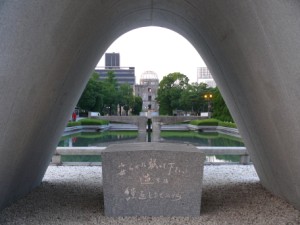 On August 6, 1945, over 70,000 people were killed instantly, and many other people also suffered injuries from the radiation.

Within a second, the whole building was destroyed, but the dome survived because the blast wind came vertically and because it had a lot of windows that may have made a way in which  the wind could escape.

I hope many foreigners will visit this dome and think about the way people of today are. Did we learn from our history? Who is still  making a profit from causing a war? Who is making weapons?

We had a lot of feelings in Hiroshima. My husband’s impression on Hiroshima was beyond thought.

He was also shocked how modern the present-day Hiroshima is. Japanese people are really patient and perseverant.